Multiple industries in Marion County are banking on growth in our region with the anticipated opening of the World Equestrian Center. The real estate industry has seen a strong uptick in property sales, and the agents at Hudson Phillips Properties are poised to welcome new clients to our beautiful part of the country.

Hudson Phillips’ Realtor Stacey Rollins has reported that 85% of her buyers come from out of state, as prospective home buyers are attracted to Ocala due to the excellent property values and speculation that real estate is a winning investment in our area.

Ocala is being put on the map with the World Equestrian Center opening, and that means that more real estate clientele will be coming to town. Currently the best airport options are Orlando and Gainesville, but alternatives are about to be offered with the renovations at the Ocala Regional Airport. Initially there airport will be open to private planes and charters, with an eye on eventually scheduling commercial flights in the near future.

Several amenities that the airport is offering is meeting space for corporate clientele and a restaurant and outdoor space to eat; it will be a perfect meeting sight and visitors coming to Ocala Breeder sales.

Stacey Rollins has been over several times to meet with the airport Director, as she is aware that the airport renovations will be appealing to inbound clientele. She also has a love for airplanes that traces back to her childhood.

“When I was younger, my parents would take me to the Des Moines airport on Sunday afternoons to eat lunch and watch the planes land and take off. This is when you could go to the gate and watch from the glass, long before the TSA restrictions.  So the fact that families can eat and watch the planes take off right here, is a cool concept for any age kid and adult.”

Stacey’s intuition is that the airport opening will make travel easier for certain clientele, and the location of the airport is such a convenience due to the proximity to the Hudson Phillips and Ocala Horse Properties’ offices.

“I also love showcasing our Hudson Phillips / Ocala Horse Properties office, as it’s right by the airport and hands down we have the best coffee and a beautiful lobby where clients can relax.  Buying or selling can be an emotional experience, and we want everyone to feel at home.

“I’m very proud of the Hudson Phillips’ team and what we have accomplished this past year, We are selling the lifestyle and the community.  My personal goal every time I meet with an out of town buyer is to make them so comfortable with the area, they want to move here. The best is yet to come!”

Below is and excerpt from Stacey’s interview with Matt Grow for her magazine, Front Gate Ocala.

What is your job title and role with the airport?
Matthew Grow, Airport Director.  My role as Airport Director centers around the professional, administrative, and supervisory aspects involved in the day to day and long term operations of the Ocala International Airport.  The Ocala Airport is a towered general aviation facility that accommodates charters of up to Boeing 757 sized aircraft. I’m essentially responsible for airport marketing, finances, revenue-generation, budget preparation, planning and real estate development, airport operations and maintenance, FAA and State grant administration, construction, and contract management.

The new building has Vermont farmhouse feel with a modern craftsmanship.   How was the design decided?
It is interesting you should say that.  We hosted three design meetings where the City Council, Airport Advisory Board, and the general public were invited to provide opinion and direction on what they liked, and what they didn’t like as far as architectural styling.  It was an interesting process coordinated by a facilitator.  The facilitator compiled the answers and after some tweaking for operational factors, came up with the design you see today.  It definitely has a classic equestrian feel that compliments the Ocala Breeder Sales campus across the street.

The new building is just over 17,000 square feet, what is the use of space?

The building will be home to Airport Administration, the restaurant, some meeting space, three rental car companies, and the prime tenant Sheltair Aviation.  Sheltair Aviation is the “concierge” so to speak, providing top notch service to based and transient pilots and their passengers.  From fuel to catering to rental cars and hotel accommodations.  Sheltair coordinates it all.

What can we expect to see for interior design?
It is a single story design, but the inside will feel very spacious.  I think people will be most impressed with the polished concrete floor in the lobby.  The overhead LED lighting will make the floor sparkle!  There will be some equine inspired installations inside the lobby, but overall the interior décor is aviation themed.  From the medallions on the columns outside to the hanging aircraft inside.

Will there be a franchise restaurant or a local restaurant operator ?
The City is currently negotiating with a local company.  I can’t officially name them until the contract is approved, however we are very excited.  The terminal can accommodate outside seating, but that would be added sometime in the near future. The restaurant name will be Elevation 89, named after the airport elevation.

Share with us the history of the statues of jockeys as you enter the building?
The statues you speak of represent the many breeder farms local to our community.  They have welcomed air travelers for decades and will continue to do so at the new terminal.  Many times these farm owners will fly in and their staff will rearrange the jockeys so they are up front.  They literally jockey for position! 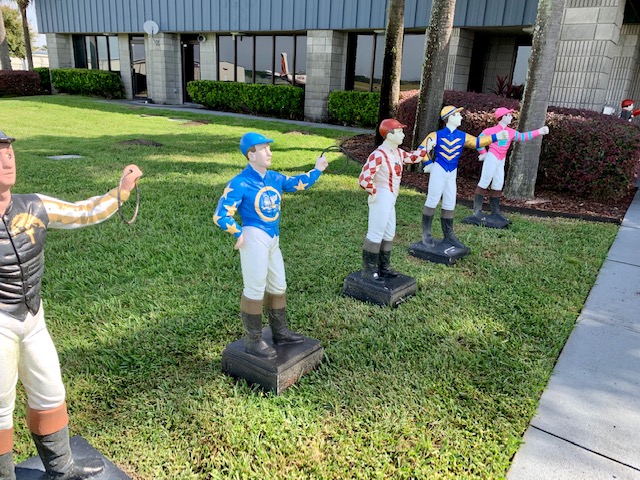 How will the World Equestrian Center affect the airport?
The WEC has already begun changing the local economy.  We hear pilots and passengers speaking of it regularly, and many local businesses have spoken excitedly about the future of Ocala as home to the WEC.  Sheltair Aviation is very enthusiastic about the increase in business jet traffic as a result of the massive development, so much so they are investing millions in additional hangar space to house the additional aircraft.

Being so close to Ocala Breeder Sales, will the airport be used to ship horses?
Yes, horses fly in and out of Ocala several times per year on a special Boeing 727 fondly nicknamed “Air Horse One”.  They are brought to the base of the aircraft via transport truck, and walk up a ramp and into the aircraft via a clamshell door on the side.  The cost is relative to the destination.

What does the future look like for the land that is available for sale?
The airport has approximately 400 acres of non-aviation property for sale.  Non-aviation means the property is too far away from the aviation infrastructure, and would be better suited for industrial, commercial or retail development.  We are trying to better diversify our revenue streams, and recently leased a 12 acre industrial campus to a company called Wellbilt Industries.  Wellbilt manufactures large industrial doors of any size.  They just constructed a hangar door for Google, and it was over 100’ tall!

How is the airport involved in the greater Ocala community?
We hold several Open House style events, usually centered on flying museums such as the Experimental Aircraft Association or Collings Foundation flights.  Recently, Sheltair Aviation has begun hosting a much larger event, the “Ocala Airport Fall Festival”.  They incorporate static displays of aircraft with kids games, raffles, and kids are encouraged to come in Halloween costumes.  Proceeds go to support Racing For Cancer, which supports various cancer programs focused on early detection and prevention.

The golden question: Will there be commercial flights into Ocala?
Many of the major carriers already fly into the airport on a charter basis, so their dispatchers are familiar with our facility.  As was stated previously, the airport can handle aircraft as large as a Boeing 757, so the infrastructure at the airport isn’t preventing airline service.  It is only a matter of time when the community can financially support airline service.  I would recommend the business community coalesce their voice and start marketing/petitioning airlines.

The NEW Ocala International Airport will be “The Front Door first impression of Ocala and last impression when they leave.”

This Property Added to Favorites.

Close this window to continue adding favorites!
You may also view your favorites from the favorites menu.